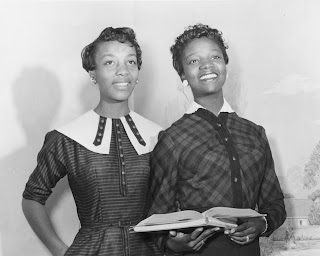 Entering on September 13, 1956, the young women were first housed on the first floor of the west wing of Shaw Residence Hall. By the time of their graduation in 1960, there were approximately twenty African-American students attending the Woman’s College.

The parlor of Shaw Residence Hall was named in honor of these two pioneers in 1992; and in 2008, the Smart-Tillman Distinguished Professorship in the School of Music, Theatre, and Dance was created.

The exhibit will be on display in the main lobby of Jackson Library from January 12 to March 15, 2010.