And the Mystery of Seal Island 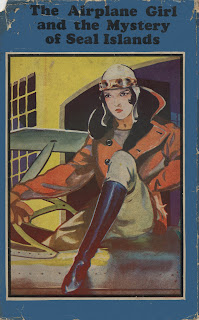 Although not the first of the “flying girls” series (the “Girl Aviator” series appeared in 1911, and there are other earlier series involving a female aviator), the “Airplane Girl” books (four titles, all in 1930) demonstrated the continuing fascination with flying and the increased independence of daring women. The books concern the airborne exploits of Roberta Langwell, the “Airplane Girl.”

“Her exploits are those of a modern young aviatrix who knows no fear. She will keep you tense with excitement. . .”

This series is one of the few girls’ series in which a woman writes under a male pseudonym; a number of males (L. Frank Baum being one) wrote girls’ books under a female pseudonym.
-Dr. William K. Finley