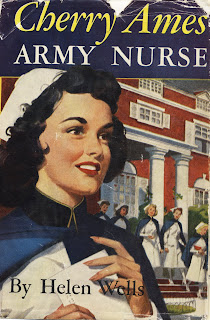 The popular “Cherry Ames” series created in 1943, in the midst of World War II, and was one of several patriotic series among girls’ books. While the early titles centered on the war efforts of nurse Cherry and her colleagues, the series lasted through twenty-six titles until 1968, the post-war volumes showing “Nurse Cherry” in a variety of civilian nursing roles (“Dude Ranch Nurse,” “Department Store Nurse,” “Jungle Nurse,” etc.). Although not the first “nursing” series, “Cherry Ames” is unique in having so many volumes devoted to a single occupation. Clearly the publishers believed in the enduring nature of their publicity claim for the series,

“It is every girl’s ambition at one time or another to wear the crisp uniform of a nurse. The many opportunities for service, for adventure, for romance, make a nurse’s career a glamorous one.”