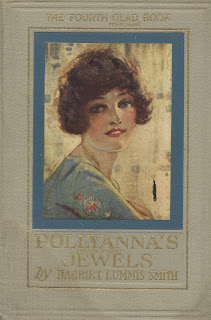 Like “Miss Minerva” and “The Wizard of Oz,” “Pollyanna” represents a popular series begun by one author and continued by others. The first two books of the series (1913-1915) were written by Eleanor Porter; the next four (1924-1929) were penned by Harriet Lummis Smith; and the final eight (1931-1951) were by three other writers. Thus the series was sustained over thirty-eight years, one of the longer runs of any girls’ series.As the cover announces, the “Pollyanna” books (the name featured in every title) formed L. C. Page & Company’s “Glad Books” series. Pollyanna is very similar to Anne Shirley of “Green Gables” fame: both are orphans sent to live—unhappily at first—with strangers or distant relatives. Both quickly charm their adopted families and aid all in need of comfort, and both age from young girls to middle-age wives and mothers. The name “Pollyanna” has come to represent unstinted optimism in the face of great difficulties. As the dust jacket for the first “Pollyanna” book proclaims,

“Take away frowns! Draw up the window shades! Put down worries! Stop fidgeting and disagreeing and grumbling! Cheer up everybody! Pollyanna is here!”