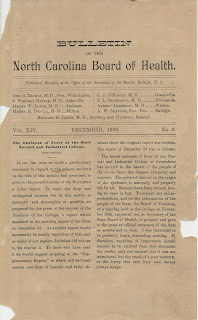 In November and December of 1899, the State Normal and Industrial College [now UNCG] faced a major crisis that almost shut down the school permanently after existing for only eight years. On November 15, 1899, Linda Toms, a student from Shelby NC, died suddenly from typhoid fever. Following her death, twelve more students would contract the illness and die prompting President Charles McIver to shut down the school in an attempt to stop the sickness from spreading.

At the time, the deaths of 13 students accounted for 3% of the total student population. Based on today’s enrollment numbers, a 3% death rate would equal 558 students! Also, roughly 12% of the students became ill in 1899 meaning over 2,234 students would take ill today based on the same percentage. Amidst the current worldwide scare of H1N1, the University Archives invites you to view its newest exhibit A Cloud of Death Engulfs a Campus: Typhoid Fever and UNCG in 1899 and look back at UNCG’s first pandemic and learn about the scare it faced 110 years ago.