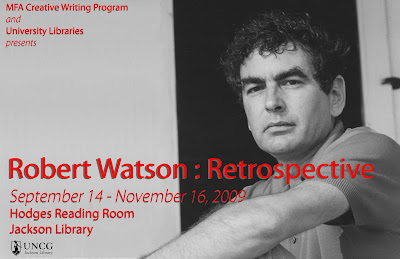 Bob Watson was born in Passaic, New Jersey and educated at Williams College (B.A.) and Johns Hopkins University (M.A., Ph.D.) after serving in the U.S. Naval Reserve in World War II; in addition he attended the University of Zurich as a Swiss-American exchange student. In 1952 he married Betty Rean and the next year joined the English faculty at the Woman’s College of North Carolina for his first full-time teaching position. He remained on the UNCG faculty until his retirement in 1987, having obtained the rank of Professor in 1964.

An organizer and director of the formal MFA Writing Program at UNCG, he also was co-founder in 1966 (with Lawrence Reynolds) of the nationally acclaimed Greensboro Review.

The author of five collections of poetry, two novels, and two plays, as well as numerous other publications, Watson has received many honors for his work. In 1962 he was the first resident of North Carolina chosen to read on the Poetry Circuit, established by the UNC Press. His 1966 collection of poems, Advantages of Dark, was nominated for the Pulitzer Prize for Poetry. In 1972 he was invited by the Library of Congress to participate in their series of Poetry Readings under the auspices of the Gertrude Clarke Whittall Poetry and Literature Fund. In 1974 he received a grant from the National Endowment for the Arts and in 1977 a grant from the American Academy and Institute of Arts and Letters “for literary excellence and promise of important work to come.”