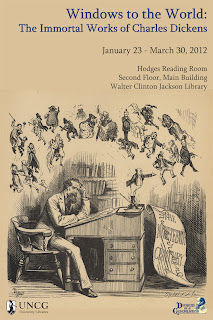 With the possible exception of Shakespeare, no English author is better known than Charles Dickens. Dickens was a household name during his lifetime, and his reputation has not dimmed with the passage of time. This exhibit, which includes twelve of his most popular books—the majority represented in first editions—illustrations from his works, and an assortment of ephemera, celebrates the bicentennial of his birth on February 7, 1812.

Dickens won the admiration and praise of his readers, critics, and fellow authors; and countless books and articles have examined and heralded his life and writings. His grave in the Poet’s Corner of Westminster Abbey represents the highest tribute paid to an English author.
This exhibit attempts to allow Dickens’s genius to speak for itself, in his own words about his work and in the words of his immortal characters.
Illustrations—most of them the original illustrations—are included for each book. Dickens was one of the first authors with the power to select his own illustrations, thus giving them a particular significance as interpreters of his characters and events. He worked with some of the most distinguished artists of his day—George Cruikshank, Hablot Browne (“Phiz”), George Cattermole, and Marcus Stone foremost among them.

The many items in the exhibit that carry his name—commemorative plates, medallions, plaques, playing cards, etc.—show that perhaps no author in history has been commercialized more than Dickens. Although Dickens would undoubtedly have railed against this exploitation,it bears testimony to his immense and enduring popularity.

It is difficult to choose a single comment to summarize this great author’s life and work, but the words of his biographer G. K. Chesterton in 1906 ring true:

“The positive argument for the permanence of Dickens comes back to the thing that can only be stated and cannot be discussed. He made things which nobody else can possibly make.”

Thanks are due to Richard Levy, Norman Smith, and Kimberly Lutz for lending items to this exhibit, and to Carolyn Shankle for devoting time to designing this catalogue and the exhibit poster.

Exhibit Catalog
Exhibit catalog is in PDF format. You will need Adobe Reader