Revolutionary composer, Elliott Carter (1908-2012), passed away November 5th, ending an award-winning career as an icon of modern orchestral music. As a two-time Pulitzer Prize winning composer, his contribution to the world of American musical composition is undeniable, but cello music shares a special relationship in the Carter legacy.

Elliott Carter’s debut into the realm of modern American composition initiated with “Sonata for Violoncello and Piano” (1948), inspired by and written for cellist, Bernard Greenhouse. At the time of the score’s conception, the standard of cello music was based upon (and still is to some extent) the celebrities of the Classical Era: Bach, Beethoven, and Haydn— just to name a few. Carter, influenced by the avant-garde rhythms of jazz, imagined cello music with a different attitude, but he would need to find a singular musician to give life to his music. Carter found such a musician in Bernard Greenhouse (1916-2011).

Elliott Carter and Bernard Greenhouse’s collaboration emerged from the music scene of 1940s New York. Greenhouse, a young and rising cellist, was introduced to Carter and discussed his interest in performing an original composition for cello by Carter. Having attended performances by Greenhouse, Carter was familiar with the cellist’s talent and style. Carter composed “Sonata for ‘Cello and Piano” for Greenhouse, and over a four month period, they collaborated in arranging for the piece’s first performance. 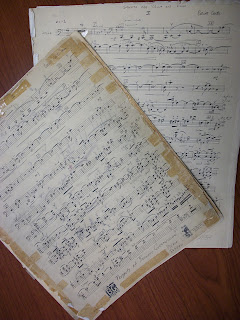 The composition proved demanding technically and physically, but Carter’s trust in Greenhouse’s musical talent was well-founded. By 1951, Greenhouse was performing the work in concert, and the “Sonata” established Elliott Carter’s reputation as a modern composer while introducing Bernard Greenhouse as a world-class cellist.
Elliott Carter’s contribution to the cello music world is preserved in the Bernard Greenhouse Cello Music Collection, which holds an original manuscript of “Sonata for Violoncello and Piano” in the hand of Carter with annotations by Bernard Greenhouse. The Martha Blakeney Hodges Special Collections and University Archives is proud to keep the Carter-Greenhouse Legacy alive by providing research access to the piece as well as preserving the score for future generations of musicians.