In the Great Northwest 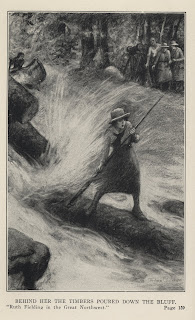 One of the longest and most diverse of the early twentieth-century girls’ series, the “Ruth Fielding” books (thirty titles between 1913 and 1934) have Ruth mature from a young girl of twelve to a young woman with a husband and child. Many of the stories are mysteries; others focus on school, travel, new inventions such as motion pictures, or patriotic participation in war. Like the Moving Picture Girls, Ruth is fascinated by the world of film and produces her own movies, which forms the plot of several stories. Ruth’s character and the mystery element in most of the titles inspired the Nancy Drew books (a later Stratemeyer series) and later mystery / adventure series.