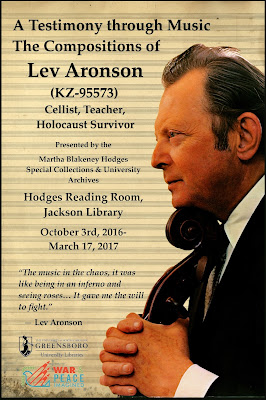 Lev Aronson is remembered as a distinguished cellist, teacher, and survivor of the Holocaust. Born February 7, 1912 in München Gladbach (now Mönchengladbach), Germany, the story of Aronson’s life and music serve as inspiration for countless students and fans, well beyond his death in 1988. With his family forced from their home in Latvia during World War I and losing five years of his life to the camps of World War II, Aronson endured one of the darkest times in human history, surviving these events to bring beauty to the world through music.
The exhibit “A Testimony through Music: The Compositions of Lev Aronson” conveys the story of his Aronson’s life through his sheet music, the collection of which is available for research at the Martha Blakeney Hodges Special Collections & University Archives at Jackson Library. This exhibit features several musical manuscripts, composed by Aronson, relating to his experiences in the Nazi and Russian labor camps. Included among these pieces are vocal works in Yiddish focused upon his experiences during the war, as well as two concert pieces for cello composed by Aronson and signed with his inmate identification number. The exhibit will be available for viewing from October 3rd, 2016 to March 31st, 2017.