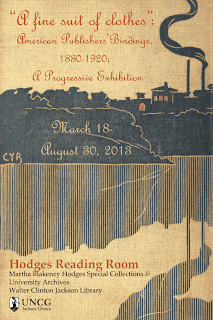 When the anonymous author of Commercial Bookbindings, a historical sketch and description of an exhibition at the Grolier Club, New York, wrote in 1894, “Nobody thought of expecting the publisher to throw in a fine suit of clothes with the book,” he was commenting on the early years of what was to be the golden age of American book cover design.  The period from 1880-1920 saw the rise and decline in the use of artist/designers, and the astonishing results they could achieve with colored cloth, a few colors of ink, gold and silver, and a canvas the size of a book cover.  The Charles Adams American Trade Binding Collection at the University Libraries has a large selection of bindings concentrating on this period and particularly its zenith, from 1890-1910.

To celebrate its collection and to accompany the new exhibit entitled “A Fine Suit of Clothes: American Publishers’ Bindings, 1880-1920: A Progressive Exhibition,”   the University Libraries are sponsoring a presentation by Richard Minsky on the art and commerce of 19th and 20th century American trade bindings. The presentation will be held in the Hodges Reading Room (on the second floor of Jackson Library) on April 16 at 4 PM.  The talk and reception following are both free and open to the public.

The exhibit will run from March 18 through August 30. It is open to the public, Monday through Friday, 9 AM to 5 PM. Bindings on display will change throughout the exhibition period.