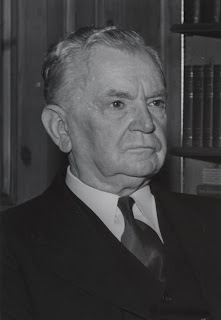 The UNCG Archives has recently unveiled a new archival exhibit documenting the life of Chancellor Walter Clinton Jackson and his connection to Jackson Library. It is on display in the vertical connector case and will be visible from March 15, 2010 until September 2010.

Walter Clinton Jackson was born in Hayston, Georgia on June 18, 1879. In 1909, he joined the State Normal and Industrial School (now UNCG) faculty as a professor and then later became head of the Department of History. In 1934 he was appointed the third Chief Executive of the College and served 16 years as Chancellor. In 1948, ground was broken for the construction of a new library on campus. It was completed in 1950 and was officially named Jackson Library in honor of W.C. Jackson in 1960.