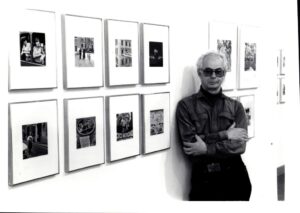 A new exhibit on the first floor of Jackson Library shines a spotlight on American and international lives during Woodstock, the Sturgis motorcycle rally, the Greensboro Massacre, and street and landscape scenes from Beijing.

Located in the three exhibit cases by the reference desk on the first floor, the exhibit is created using reproductions from the Arnold Doren Papers. The Doren Papers includes photographs, slides, negatives, and digital photographs from Doren’s long career as a photographer. The collection also contains Doren’s personal papers, including some of his teaching materials. The collection’s materials date from the late 1960s to the early 2000s. The materials on display are a small sample of some of Doren’s photographs, showing the range of subjects he captured during his long career.

Doren’s interest in photography began when he was a teenager, photographing local life and high school athletics. Doren went on to serve in the Korean War as a Navy journalist in the Public Information Office. After his time in the military, he attended the Rochester Institute of Technology, where he received his Associate of Applied Science (A.A.S.) and Bachelor of Fine Arts degrees. While at RIT, Doren studied photography under famous photographers Minor White and Ralph Hattersley.

Doren discovered his passion for art photography while working in New York City as an assistant to photographers Irwin Blumenthal, Irving Penn, and Alan Vogel. His work in New York him to travel both in the United States and internationally. Doren’s photography often focused on documenting people – he photographed portraits, major social events, or everyday life in towns and cities.

His travels eventually led him to a commune in Woodstock, leading to his famous photographs of the Woodstock Festival in 1969 and Jimi Hendrix’s closing performance. A major piece of the exhibit, the Woodstock photographs were selected to mark the festival’s 50th anniversary in 2019.

New Internationally recognized, Doren’s photography has been displayed in galleries across the world. Doren remained at UNC Greensboro until his retirement in 2002. In 2003, Doren passed away in his home. Special Collections and University Archives received the collection in 2009.

Visit Special Collections and University Archives at the Martha Blakeney Hodges Reading Room on the second floor of Jackson Library if you want to learn more!