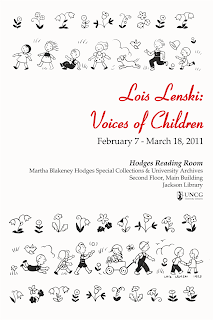 Lois Lenski (1893-1974) was one of the most popular and most gifted among children’s authors and illustrators of the twentieth century. This small exhibit is an attempt to document her talent and to show, in her own words, her intense feelings for the proper literature and education for children.

Born and reared in Ohio, Lenski gravitated early to a career in art. Although she majored in education at Ohio State University and prepared for a career in teaching, she took many art courses in college, decided on art as a vocation, and pursued this career at the Art Students’ League in New York, furthering her art studies in England and Italy. At the Art Students’ League,she became an assistant to the muralist Arthur Covey and married him in 1921. Advancing from part-time jobs designing greeting cards and drawings for advertisements, Lenski spent the decade of the 1920s illustrating the works of others, primarily for children’s books. In addition to illustrating works such as Padraic Colum’s The Peep-Show Man and Kenneth Graham’s The Golden Age and Dream Days (which allowed her to exercise her passion for medieval costume and culture), she developed an association with the New York publishing firm Platt and Munk, illustrating such well-known works as Cinderella and The Little Engine That Could.

At the suggestion of an editor, Lenski decided to try her own hand at writing for children, publishing in 1927 Skipping Village, based on her own childhood experiences in Anna, Ohio. In her long and illustrious career as both writer and illustrator, Lenski authored more than eighty books for children of various ages, including the immensely popular “Davy” and “Mr.Small” series for younger readers and the influential and provocative “Roundabout America” and “Regional America” books for older children, as well as historical novels and poetry. In addition to providing riveting entertainment, her books invariably made a plea for tolerance and understanding among all people. Among her many awards were the Newbery Medal for 1946 for Strawberry Girl, one of her fifteen regional novels for young readers, and the National Child Study Association Award in 1948.

For her many contributions to children’s literature, Lois Lenski in 1962 was awarded an honorary degree of Doctor of Humane Letters by the University of North Carolina at Greensboro.