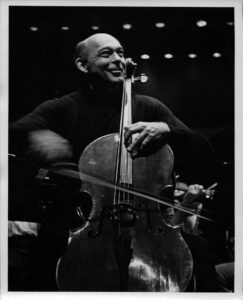 The Martha Blakeney Hodges Special Collections & University Archives is pleased to announce the donation of the collection of the legendary cellist, János Starker. Starker is among the most acclaimed cellists of the 20th century. Born in Budapest in 1924, Starker was considered a child prodigy. After World War II, during which he spent three months in a Nazi internment camp, Starker left Hungary to compete and perform throughout Europe, eventually emigrating to the United States in 1948. Once in the US, Starker became principal cellist of the Dallas Symphony Orchestra (1948-1949), principal cellist of the Metropolitan Opera Orchestra (1949-1953), and principal cellist of the Chicago Symphony Orchestra (1953-1958). As a soloist, Starker performed in over 5000 concerts. He was a trend setter as a classical recording artist, with over 150 recordings. In 1997, he was awarded a Grammy for his recording of the Bach Suites for Solo Cello on the RCA Victor Red Seal. To this day, Starker is considered to be among the most authoritative interpreters of Kodaly’s Sonata for Solo Cello. In addition to his fame as a performer, János Starker was also a beloved teacher. In 1958, he was appointed Professor of Cello at Indiana University at Bloomington.

The János Starker Musical Score and Personal Papers Collection, generously donated by his estate, includes personal papers, writings, photographs, sheet music, and recordings among its many treasures. The staff of the UNC Greensboro Cello Music Collection are prioritizing the processing of the Starker Collection and are planning to digitize as much of the material as is copyright-allowable. The collection is open for access to the public during UNC Greensboro Special Collection & University Archives regular working hours, between 9:00am – 5:00pm, Monday through Friday. To facilitate your visit or if you have any questions, please contact the curator of the collection, Stacey Krim, at srkrim@uncg.edu or 336.334.5498.

The Cello Music Collections at the Martha Blakeney Hodges Special Collections & University Archives at The University of North Carolina at Greensboro is dedicated to acquiring, preserving, and making accessible cello music collections for research and learning. The archive contains sheet music (manuscript and published), monographs, audio-video recordings, personal papers, and artifacts associated with cellists noted for their distinguished contributions in the areas of composition, performance, pedagogy, and research. 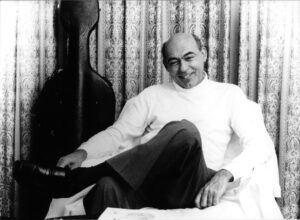