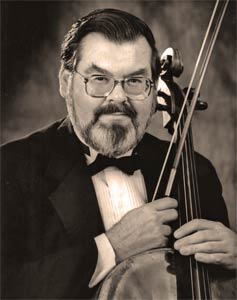 The Martha Blakeney Hodges Special Collections & University Archives is pleased to announce the donation of the collection of Douglas B. Moore to the UNCG Cello Music Collection. Douglas Moore was Professor of Music at Williams College from 1970 to 2007, and cellist with the Williams Chamber Players and the Williams Trio.  His Bachelor of Music degree in cello is from Indiana University, where he studied with Fritz Magg and János Starker, and his Masters and DMA degrees are from The Catholic University of America in Washington DC.
Moore has performed at the National Gallery of Art in Washington DC, and at the Great Music West (Utah), Saratoga Baroque, Music Mountain, and Newport music festivals. He has been an artist/faculty member at the Manchester (VT) Music Festival (1998-2008) and Kansas City Cello Clinic. He has been principal cellist with the Great Music West Festival Orchestra in Utah, the Albany (NY) Symphony, Berkshire Symphony at Williams College and the Lake George Opera Festival orchestra. From 1991 the 1995 he was a member of the Saratoga Chamber Players, based in Saratoga Springs NY. He has also conducted cello orchestras at cello congresses, cello camps and universities, and given frequent master classes.
In 1976, Moore played the world premiere performance of the Cello Sonata, Op. 78 by Arthur Foote. His edition of the complete music for cello and piano by Foote was published in 1982 by A-R Editions on the Recent Researches in American Music series. The first modern-day performance of Foote’s Cello Concerto took place in 1981 with Douglas Moore as soloist. Since then, he has performed the work with orchestras in Connecticut, Minnesota, Virginia, Massachusetts, Vermont, Illinois and Iowa. He has recorded music by Foote, Farwell, Cadman, Arensky, Rachmaninov, and Kechley on the Musical Heritage Society, Grand Prix and Liscio labels.
Moore has published over forty original arrangements through his publishing company, PlayMooreCello, including Sousa’s Stars and Stripes Forever and Rossini’s Barber of Seville Overture. His arrangements have been recorded by Yo-Yo Ma, the Saito Cello Ensemble of Japan and the Boston Cello Quartet. Additionally, Moore has published nearly 3 dozen modern editions of late 18th and early 19th century duos for violin and cello, most of which have never appeared since their first publication.
The Cello Music Collection of the Special Collections and University Archives contains sheet music (manuscript and published), monographs, serials, audio-video recordings, personal papers, and artifacts associated with cellists noted for their distinguished contributions in the areas of composition, performance, pedagogy, and research. Douglas Moore is the twelfth cellist represented within the UNCG Cello Music Collection. Consisting of the archival music collections of Luigi Silva, Elizabeth Cowling, Rudolf Matz, Maurice Eisenberg, János Scholz, Fritz Magg, Bernard Greenhouse, Laszlo Varga, Lev Aronson, Lubomir Georgiev, Marion Davies, and Douglas Moore, the Cello Music Collection at The University of North Carolina at Greensboro constitutes the largest single holding of cello music-related material worldwide.