As part of the University’s celebration of 125 years of opportunity and excellence, the Hodges Reading Room in Jackson Library will feature an exhibit of UNCG history through the end of the academic year. Exhibit materials will rotate throughout the year, with new content added on a bimonthly basis. It will conclude on May 31, 2018. 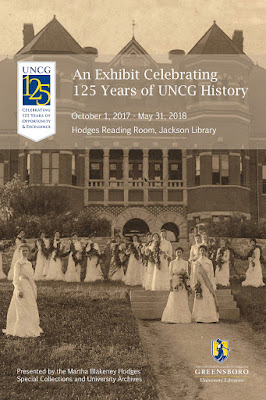 Currently, the exhibit features materials from the founding years of the State Normal and Industrial School, including an original copy of the 1891 Act of Establishment in which the North Carolina legislature founded the institution, the letter sent to Charles Duncan McIver in June 1891 informing him that he had been named the school’s first president, and photographs and other document reflecting the faculty and staff who were instrumental in the Normal’s early years. Of particular note, the exhibit also includes the always-popular death mask of founding president Charles Duncan McIver, who passed away in 1906.

A second UNCG-themed exhibit currently in Hodges Reading Room explores the early history of the Alumnae (now Alumni) House, which opened in 1937. It was designed by Penrose V. Stout of Bronxville, New York, and modeled after Homewood in Baltimore, Maryland. Photographs, serving dishes, a guest register, and other items important to the Alumnae House are on display.

In future months as the exhibit contents are rotated, themes including social and political protests on campus, student organizations, and faculty contributions will be explored.