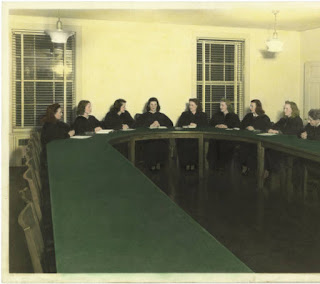 The Martha Blakney Hodges Special Collections and University Archives invites researchers to learn more about history of student self-governance at The University of North Carolina at Greensboro (UNCG) by looking through the recently processed records of the Student Government Association (SGA).  The first instances of self-government began in 1910 when a student council, comprised of three elected officials from each class, was created to act as an advisory group for student issues.  In 1914, school president Julius Foust agreed to the students’ proposal for a more official organization and allowed for the creation of the Self-Government Association.  This new organization, consisting of four elected officers (president, vice president, secretary, and treasurer) would become the SGA in 1921.  Over the next several decades, the SGA would grow into a respected and active organization on campus. This collection helps to document the SGA’s growth and progress by providing a variety of historical materials including correspondence, flyers, memorandums, manuals, meeting minutes, newsletters, notes, reports, and speeches.
More information about the collection can be found though the collection’s finding aid at:
https://libapps.uncg.edu/archon/index.php?p=collections/controlcard&id=508
The Martha Blakney Hodges Special Collections and University Archives is open Monday through Friday, 9am until 5pm.  The collection is open to the public.  We encourage researchers to make appointments ahead of time by contacting us at 336-334-5246 or at SCUA@uncg.edu.