A new exhibit titled “Athletics and Active College Work: Women’s Fitness and Sport at State Normal, 1892-1920” is now on display in the Hodges Reading Room in Jackson Library. This exhibit explores women’s athletics at the turn of the 20th century through the lens of the State Normal and Industrial School (now UNCG). 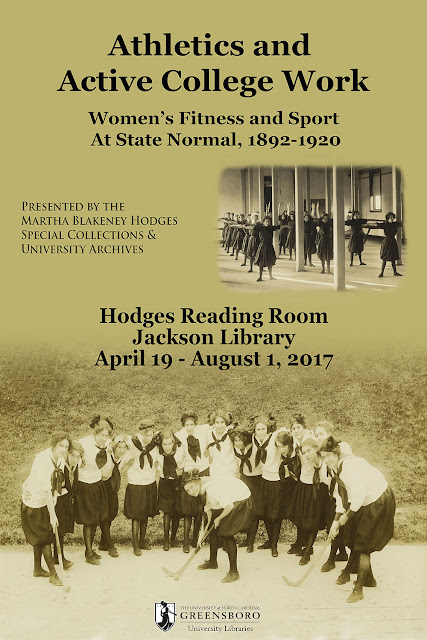 From its opening in 1892, the State Normal and Industrial School emphasized physical activity and personal health. Curriculum in the first year of the school’s existence (1892-1893) included the Department of Physiology and Heath, which had two objectives: instruction in hygiene and an individualized program of exercise. A course in Physical Culture was required of all students, and all faculty members were expected to be able to give instruction in the subject. The work included gymnastics, calisthenics, and other exercises that were meant to promote the student’s general health and strength. These courses took place in the campus gymnasium, a small room located on the top floor of the northeast section of the Main Building (now Foust).

Students, however, wanted more. In 1898, they petitioned State Normal President Charles Duncan McIver for a designated space for them to participate in team or outdoor sports, including basketball and tennis. The Class of 1900 finally convinced McIver that the school needed both athletic grounds and a campus Athletic Association. He and the school’s Executive Committee ordered that an outdoor playing field be prepared, “surrounded by an evergreen hedge or some other construction to avoid observation from without.” Members of the Class of 1900 did most of the work involved in cleaning and preparing the new athletic field, including clearing the area of brush and debris, marking the fields, and installing nets and basketball goals.

Although it received little to no financial support from the school, the State Normal’s Athletic Association grew, electing officers, forming committees, and planning for the long-term upkeep of the fields. Additionally, the organization developed intramural tennis and basketball tournaments, with each class establishing its own team. In 1902, the Association adopted their official motto: “Athletics and Active College Work Go Hand in Hand.” 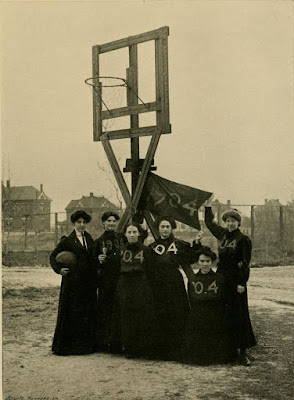 In the “Athletics and Active College Work” exhibit, you will see photographs of the many basketball, field hockey, tennis, and baseball teams that competed in the Athletic Association tournaments and Field Day competitions. Also on exhibit is a gym suit worn by students during this time.

The exhibit will be on display in Hodges Reading Room through August 1st. It is available for viewing during SCUA’s normal operating hours (typically Monday through Friday between 9am and 5pm).