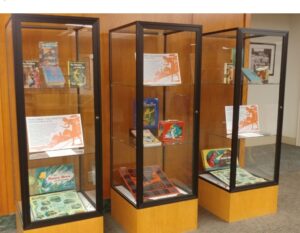 If you have not had a chance to get by the Nancy Drew exhibit in the Jackson Library Lobby – please do so!

Perhaps more than any other book series, the Nancy Drew mysteries have captured the hearts and imagination of generations of young adults. First published in the 1930s, the books featured the adventures of the independent, plucky daughter of widowed attorney Carson Drew. With her best pals Beth Marvin and George Fayne in tow, Nancy Drew constantly finds herself in the middle of thrilling mysteries which were inevitably solved by the last chapter. The first three books were published in April 1930 and The Secret of the Old Clock, The Hidden Staircase, and The Mystery of Lilac Inn were immediate successes. By the seventh installment, Ned Nickerson is introduced as Nancy’s love interest, often tagging along on her adventures.

Originally penned by Mildred Benson under the pseudonym of Carolyn Keene, later volumes were ghostwritten by various other authors, keeping a relatively consistent style. Through the many decades of publication, Nancy and her friends saw numerous updates. In the first books, Nancy sported pearls and pumps and drove a “roadster.” By the 2000s, her look was modernized and she drove a hybrid electric car and handily used her cell phone for quick calls and information queries. These updates have been reflected not only in the style of the characters, but also the framework of the books. In 2003, publishers Simon & Schuster concluded the format of the original series and featured her character in the new series, Girl Detective. By 2013, the publishers again changed the format of the books into The Dairies, further updating the character and her adventures.

The enduring worldwide appeal of Nancy Drew has been a result of engaging plot-lines and characters, as well as the successful marketing of the brand through the decades. Lunch boxes, cookbooks, games, and paper dolls have kept the characters active and relevant. This exhibit reflects the popularity of the Nancy Drew franchise by incorporating books and artifacts from the Martha Blakeney Hodges Special Collections and University Archives!