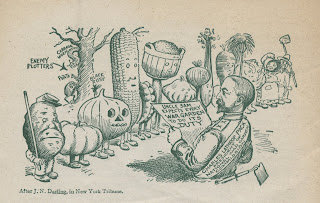 Inspired by the devastating food shortages in Europe, Charles Lathrop Pack promoted gardening on the homefront. The National War Garden Commission was established in March 1917. Pack’s essay “Make Your War Garden a Garden of Victory” describes the genesis of the victory garden program.

During World War II, the Victory Garden was promoted as both a patriotic duty and thrift measure. The Office of Defense Health and Welfare Services was joined by such companies as Kerr Glass Manufacturing to advertise the Food For Victory campaign.

Throughout the 1970s, the energy crisis, inflation, and political upheaval fueled a desire for thrift and self-sufficiency. The individual, or “Victory Garden” returned and the community garden movement took hold in more urban areas. Even the threat of nuclear war was a motivation to learn how to produce, prepare, and store one’s own food.

Take a moment as you pass through the EUC Connector to discover how the War Garden of World War I became the Victory Garden of World War II and how the events in the 1970s inspired a resurgence of the victory garden as well as the creation of the community garden movement.
You can search within the World War I Pamphlet Collection and Home Economics Pamphlet Collection through the library catalog.