The Campfire Girls at Camp Keewaydin 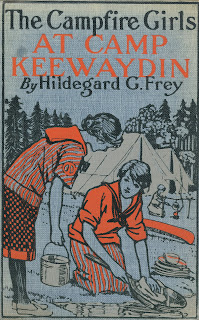 Undoubtedly the most complex entry among girls’ series, there were at least ten separate series about the “Campfire Girls,” all by different publishers, representing the work of at least eleven different authors. The ten Hildegard Frey titles were published by A. L. Burt between 1916 and 1920; the titles in the other series—totalling sixty books—appeared between 1912 and 1935.

As one might gather by the titles, the various publications espoused the outdoor life and camaraderie among young girls while generally introducing mystery, adventure, and problem relationships into the plot.

The Radio Girls of Roselawn 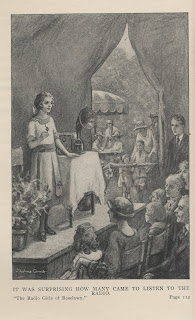 Like the many series focused on the modern inventions of the automobile, the airplane, and motion pictures, this series, a spinoff of the “Radio Boys’ series, exploited the fascination with radio in the early years of the twentieth century. The series was short-lived (four titles from 1922 to 1924), indicating how quickly the novelty of radio wore off. Surprisingly, these books, originally published by Cupples & Leon, were reprinted word for word by Goldsmith in 1930 as titles in its version of the “Campfire Girls” series!