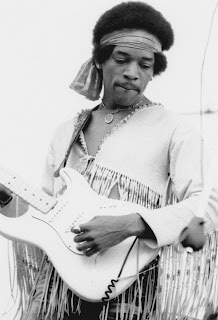 The Arnold Doren Photograph Collection was acquired by the University Libraries in 2009. Doren, an award-winning photographer, was a member of the UNCG art department faculty from 1978 to 2002. Doren died in 2003.

Doren traveled around the world taking photographs of places, people, things and events. Traditional, Polaroid and digital photographs are included. Also there are landscapes, portraits, and still lifes. The Collection consists of over 70 boxes of varying sizes and is proving to be a treasure-trove of artistic and historical images.

The “Woodstock 1969” exhibit includes 20 images. Actually, Doren took 10 rolls of film at the Woodstock Festival and printed just over 35 images. The images of Jimi Hendrix are perhaps the most memorable—although photographs of those attending the Festival are quite revealing. The photographic contact sheets for all of the images are a part of the Collection.

The Woodstock Festival was held on the 600 acre farm of Max Yasgur, located in Bethel, NY, 43 miles southwest of the village of Woodstock. (Some of the photographs are identified as “Bethel 1969.” Only later were they identified as Woodstock.) Thirty two performers sang to approximately 500,000 people during the three-day festival which began on August 15, 1969, at 5:07 p.m. with Richie Havens. Other performers included The Who, Sly and the Family Stone, The Grateful Dead, Arlo Guthrie, Jefferson Airplane and Jimi Hendrix—the last performer of the Festival and perhaps best known for his rendition of the “Star Spangled Banner.”
-Betty Carter