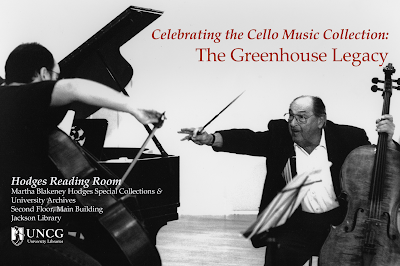 Among the most distinguished cellists of the 20th and early 21st centuries, Bernard Greenhouse, now in his 95th year, continues to teach at his home on Cape Cod and to inspire music lovers the world over, largely through his many recordings with the Beaux Arts Trio. As the founding cellist of this legendary trio, Greenhouse joined forces in 1955 with pianist Menahem Pressler and violinist Daniel Guilet (later followed by Isidore Cohen) to perform and record the entire standard piano trio repertoire before retiring from the group in 1987. However, as Greenhouse is ever quick to point out, his career on the international chamber music stage represents only one dimension of a richly varied musical life. This exhibit of materials from his personal library, now part of UNCG’s monumental Cello Music Collection, throws welcome light on the range of Greenhouse’s activities—as a virtuoso cello soloist, as a student of Casals, as a collaborator with composer Elliott Carter, and as the long-time cellist of New York’s Bach Aria Group.